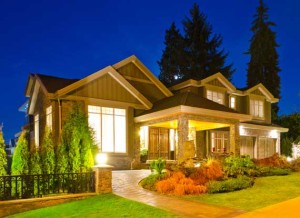 People fall in love with having a “dream home,” and cost is usually secondary. They get into debt up to the eyeballs.

Really bad idea, particularly right now. That’s because we’re at the very top of the market. In fact, it’s a bubble … certainly in Canada (and Australia is close behind). The US had their housing bubble a few years ago … but the full extent of the downturn is still to be seen.

Central banks have lowered interest rates to almost nothing in order to spur more borrowing. However, it results in more people buying homes they can’t really afford, and artificially drives up the price of those homes. 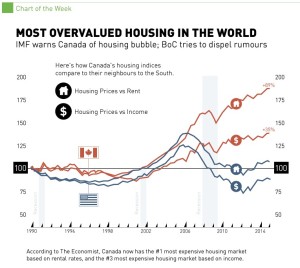 Here’s a visual from an article I clipped from zerohedge.com in March of this year about the Most Overvalued housing market in the world … by the Economist, a well-respected international financial magazine. You’ll find the full article here.

The other, possibly even bigger problem for Canada is that the International Monetary Fund (IMF) a month earlier than this article came out, sounded the alarm that Canada’s household debt is well above that of other countries. Canada (where I live) has the perfect storm just waiting to happen, and it won’t be long before it does.

But. guess who thinks it isn’t a problem? Stephen Harper, the past Canadian Prime Minister, and the Bank of Canada (Canada’s central bank) both tried to quell fears that anything is amiss. Of course, they’re both heavily biased. 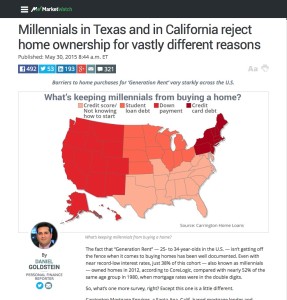 Funny enough, I noticed another article a few days ago on the site Marketwatch, about Millennials (25 to 34 year olds, in this case in the US) and the concern that they’re NOT buying homes. You’ll find the complete article here. I say, “Good for them!”

People just don’t get it. But Millennials do!

Buying a home right now would be really foolish. It’s the top of the market. You’ll be underwater financially in no time.

There’s a little more to it than that, actually. There’s an even larger, longer cycle in play right now … the 172 year cycle. (you can see my video on it here) It’s bottoming. What this means it that the usual 18.5 year real estate cycle is going to go a lot deeper than normal. Longer cycles are more powerful than shorter ones.

Edward R. Dewey spent an entire chapter on it in his book, “Cycles, the Science of Prediction.”

Above is a chart showing the pattern from 1795 through today. You can see how regular it is. It averages about 18 and a half years. If you’re smart, you buy a home at the bottom and sell (or keep it) at the top.

We had a major low in around the year 2000 in both the US and Canada. The US had a top around 2007 associated with the subprime crash. If you were to look at the appropriate chart (the real estate sector) in the US stock market, you’d see it peaking about now. It’s had a second top within the 18 year cycle. I would expect both the US and Canadian cycles to head down now and bottom in about 3 years. 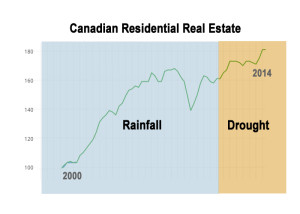 Here’s a chart of  Canada’s real estate market over the past 18 years. It’s peaking right now and I would expect another low around the year 2018 … not very far away. The challenge with identifying the Canadian cycle is that they only started recording data about 20 years ago.

This 18.5 year real estate cycle is also a rainfall cycle. It’s called the 9.3 year rainfall cycle. Dr. Raymond H. Wheeler, the Father of Climate Cycles, found that it’s wet on the upside (wet leads to prosperous times) and dry on the downside (we’re in a drought right now … it’s getting cooler and dryer worldwide, which leads to depression). Droughts always lead to depression. They always have … throughout history. 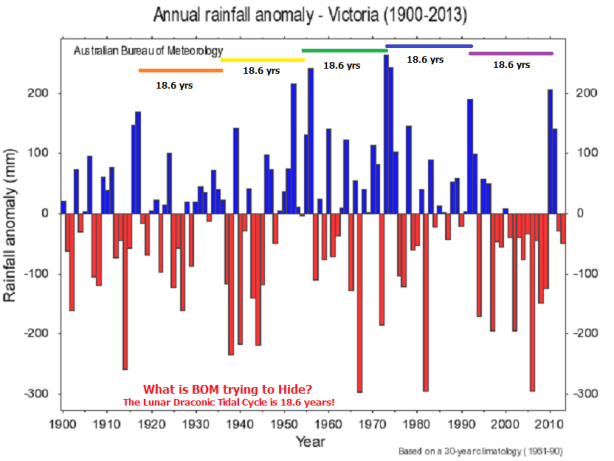 Don’t get fooled by interest rates. As I mentioned earlier, central banks (like the Federal Reserve in the U.S., the European Central Bank, and the Bank of Canada) have instigated the lowest rates in history to try to spur the economy, but they’ve been unable to do it. 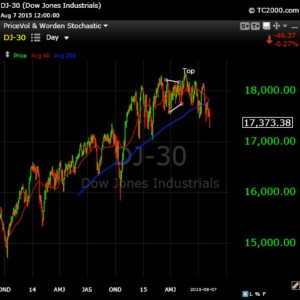 I’m expecting a very big crash very soon. The US stock market has already topped. Oil has tanked, but it’s got further to go. And interest rates are going up … quite a bit. Can you afford a big jump in interest rates? Well, I’d do the math before signing on the bottom line!

So … if you’re thinking about buying a home … think long and hard. Personally, I’d wait a few years until this bubble crashes and get in at the bottom. Some of us are projecting homes to be worth under 25% of what they are now in just five years – that’s not long to wait to get your dream home.

“The building cycle is so long that most people don’t experience two cycles in their business life. For many individuals, an unfavourable first experience means a life-time tragedy.”

Pay careful attention to the real estate market, the stock market, and the economy. The central banks have created an extreme bubble and bubbles always burst. The signs are becoming more and more ominous. We’re likely only months away from a really large contraction.

Don’t let anyone tell you this time is different.